I have only just discovered this forum area of the website and think it may be a better place to submit my fumbling attempts at and total failures to identify fungi.  When I asked Google to suggest a gill fungus with rich brown but not sticky cap and dark brown stem and gills it came up with lots of pictures of velvet shank. Sterry disagrees so I have no idea what this is, growing on the short stump of an unidentifiable (by me) deciduous tree - possibly hawthorn - by the Ashby Wolds Way near Oakthorpe. 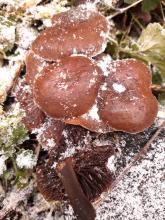 is it some frozen velvet…

is it some frozen velvet shank?

Thanks, Melinda.  The specimen possibly was frozen through; it was very cold, and I had to brush snow off it!  It's just that my book says the gills of velvet shank (which I have never knowingly seen before) are yellow or pale orange whereas these are a really dark brown.  Could the freezing, or some other factor,  have affected the colour like that?

It is lovely to find more folks looking at fungi. Don't be put off. Please put up your finds on NatureSpot. When this horrible virus is defeated, or driven into a corner, perhaps we can do a fungus foray as a group? We just had a walk round Boothorpe and Conkers. Aren't we lucky living near so much interesting access land?

Will do!  And yes, a group foray would be excellent.

Hi Melinda, I did submit that photo but it was not accepted.  Ben was unable to verity :-(

Hello Melinda,  I'm not sure how to use forums like this NatureChat to communicate with specific individuals.  Maybe it is not the best way; maybe email is better.  But assuming that my using the reply function will flag this note up to you, I thought I would ask you about the possibility of the foray that you mentioned.  The virus seems to be on the back foot at least for the moment, we are in a good time of year for seeing fungi and I am very excited by the prospect of seeing fungi in the company of somebody who knows more about them than me.  I am away from Leicestershire at the moment but will return on 18th October.  I am based in the Oakthorpe/Donisthorpe/Measham/Ashby area, by the way.  I was exploring a wood in Scottish Borders yesterday and got lots of photos of fascinating fungi which I could not identify, and which cannot go onto Naturespot!

Continuation of previous note - A Foray

... If I could find a way of attaching one of those photos I would, but I cannot!  All this about URLs is over my head I'm afraid...

Glad you are still enjoying fungus-spotting. It is a quite slow start round here this year for some reason.

We would love a fungus foray later on in the month. I am afraid we really know very little about most of them either. We are always very happy to go out and look at some.

Well I'm back from Scotland.  In fact, I'm going on a sort of outdoor day school on Saturday, run by Naturetrek, which is intended for beginners in the art of Fungus identification.  I wonder how useful it will be.  When do you suggest we have our foray, and where?  Are weekends or weekdays best for you?  Unfortunately, the next few weekends are busy for me, except Sunday 7th November...

I was wondering whether you saw my previous comment on this thread and also hoping you would see this one!  I think perhaps it's better to continue this conversation on email; if you agree, mine is jtrevordavis@yahoo.co.uk.

I did the Naturetrek day trip and it was brilliant in many ways.  We saw much and I took lots of notes and photos.  The limiting factors now are my memory and my tendency to get confused when it seems that so many species of fungi all look the same at some stage, but change there appearance with age!