The Ivy Bee (Colletes hederae) is a recent invader from the continent, first recorded in Dorset in 2001. It spread rapidly along the south coast and over the last few years has been steadily expanding northwards. Following the submission of a record from Rutland in 2017, the first Ivy Bees from Leicestershire were recorded in September 2018 from Aylestone, Narborough, Stoney Stanton and Broughton Astley. In October it was finally recorded in Thurlaston.

They are around the size of a honeybee, but can be recognised by the broad pale bands on the abdomen. Fresh specimens, particularly females have a distinctive orange colour, but this rapidly fades in older specimens. 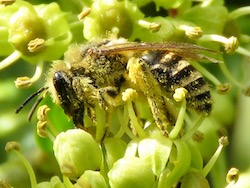 The bee is only on the wing for around six weeks, from September to the start of November. It feeds almost exclusively on pollen collected from Ivy, so stands of mature Ivy must be available close to the nest site. Ivy does not flower until it is 8 to 10 years old so it is well worth allowing the shrub to mature, thereby providing a welcome source of pollen and nectar late in the year when most other plants have finished flowering.

The bees nest in loose soil, preferably in south facing banks with little vegetation. Although each bee is solitary, building its own nest, in suitable habitats there may be thousands of nests close together. However, they do not swarm and they are completely harmless. No Ivy Bee nests have yet been recorded, so keep a lookout around the village as they do not stray far from their nests when foraging.