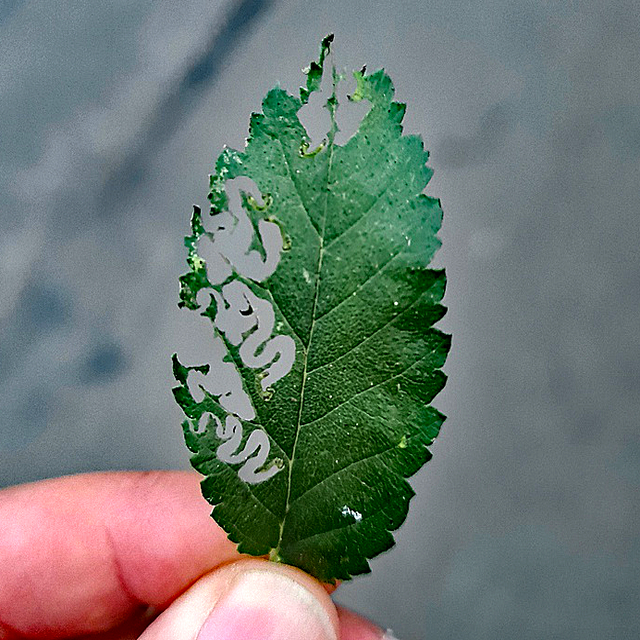 The Zig-Zag Elm Sawfly, Aproceros leucopoda, has arrived in Leicestershire - we recorded our first sighting on 15th September 2020. More...

Aproceros leucopoda is an Asian species, recorded in Europe for the first time in 2003. It was first reported in the UK in 2017 but is spreading fast and we have been waiting for it to arrive for the last two years. The adult is a tiny, black, wasp-like sawfly with whitish legs, difficult for non-experts to identify, and even exerts need a microscope. The larvae are tiny green caterpillars with a characteristic habit of holding on to the inside edge of the leaf tissues as they feed, producing zig-zag patterns between the leaf veins.

Elm populations have not recovered from the introduction of Dutch elm disease, but those that remain in hedgerows and field margins still support a large diversity of insects, such as the white-letter hairstreak butterfly (Satyrium w-album). Zig-Zag Elm Sawfly has the potential to become a serious competitor of other elm foliage-feeding species, but trying to predict the amount of damage it will do in Britain is difficult. In some areas of Europe, the sawfly has been reported to have caused severe or even complete defoliation, but in other countries defoliation rates appear to be much lower. Britain has a cooler climate than the parts of continental Europe where significant defoliation has been recorded, and it might be that the sawfly’s life cycle will be slower here and less damaging. There are no records of trees being killed by the sawfly, although severe defoliation might lead to some dieback of shoots and branches.

Now that it's here, it is important that we track the progress of this new species in Leicestershire and Rutland, and we need your help. Please submit any sightings to NatureSpot, or from outside Leicestershire or Rutland via iRecord.