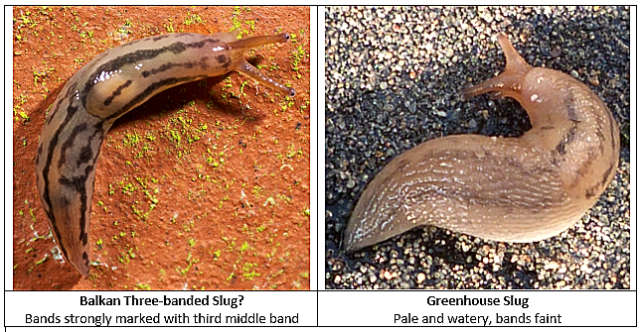 There are two Ambigolimax species in the UK. Ambigolimax valentianus, the Greenhouse Slug, is well established in VC55. But do we also have Ambigolimax nyctelius, the Balkan Three-banded Slug? More...

In general, the Greenhouse Slug has a pale and watery appearance, with a pair of black bands along its length. The Balkan Three-banded Slug is usually more strongly marked, is less watery and typically has a third black stripe down the centre. But the two species are variable and it is not always clear which species is which. The national recorder for molluscs has proposed a way forward - once it has been proven that the Balkan Three-banded Slug is found in the county then well-marked specimens will be accepted as this species. Paler, watery specimens will be accepted as the Greenhouse Slug but intermediates will be left as Ambigolimax species.

NatureSpot has had records of well-marked Ambigolimax which are likely to be A. nyctelius - but so far we have not had the species confirmed. NatureSpot recorders can help by collecting a well-marked specimen for examination and becoming the first person in Leicestershire and Rutland to have officially recorded this species! So if you think you have a likely candidate, contact NatureSpot and we will arrange to have it examined.